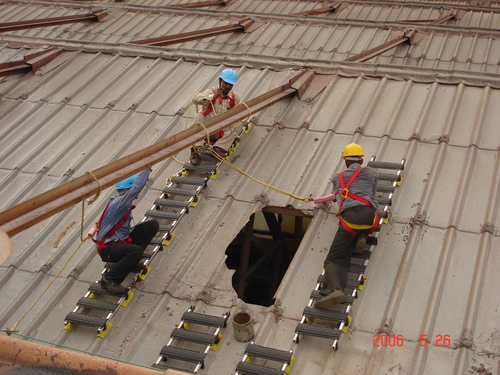 Safety of workers on roofs of A.C.Sheets has assumed high priority due to serious risks involved; often resulting in fatal accidents. Factory inspectorates, all over , have made stringent rules to provide âSOMEâ safety system compulsory. Ours is the âONLYâ easy to use, light to carry system available exclusively for roof top work. We pioneered this system in 1980. This roof top safety system has been recognised by Factory Directorates under the respective Factories Rules. It also conforms to the proposed IS specifications.

The basic principle of this system is to distribute the load of the workers on the system and transferring it to the purlin structure, avoiding concentrated load on the fragile A.C.Sheets.

After occurrence of any roof top accidents, âan occupierâ faces a chain of unwarranted events, like downtime, production losses, compensations, legal costs, loss of morale of other roof workers & litigations. The unfortunate worker, who inadvertently steps on a weakened sheet, due to itâs deceptive look, may get his compensation from the contractor who employs him or through his insurance cover. But, a âPrime Employerâ, can not avoid rigorous penalties & proceedings for lack of adherence of Safety Provisions as per demands of prevalent Factories Rules.

Our system has been awarded many âMerit Awardsâ like N.R.D.C. & of various Chambers of Commerce & Industries for its innovativeness & simplicity in its usage. Yet, our biggest reward is the satisfaction of protecting precious human lives. So far, we have supplied over 4,600 Sets of this system to various establishments all over

This safety system is surely useful & economical too. It offers immunity from post accident worries & botherations. We have a 20 minutes film on VCD which spells the utility, application  & necessity of this system which is available Free Of Cost.

We are aware, after lapse of our earlier Patent, competition has emerged for this product. They have compromised SAFETY to cut down the cost. It is observed that the Purchase Departments often compare basic price difference only. Some have tried to copy our earlier design. They have manufactured without knowledge of its operation and the rooftop problems. But, do they have answers to the problems, roof workers face, on rooftop? ALAS, NO. As an after sales service, we offer a live demonstration for the effective & correct use of our system, once procured if so required, on nominal charges. Our team of Demonstrators train the concerned people.

It is rightly said âThere is hardly anything in the world that A MAN cannot make a little worse and sell a little cheaper. Those who consider PRICE only are this manâs LAWFUL PREY.â 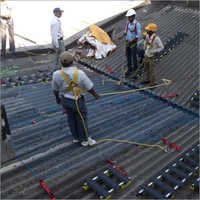 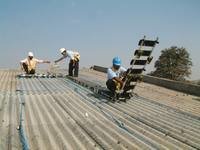 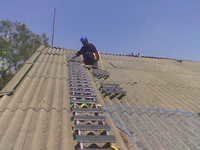 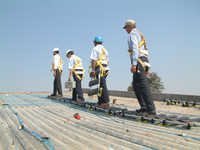 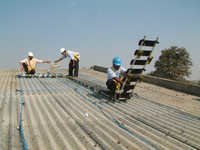